So, I smashed my 300,000 steps goals for May, raising money for Leading Lights. You can still sponsor me and donate here. I also missed some steps when I went to play basketball and left my phone, but I recorded 307,372 steps.

I took some time off for the interment of my grandad’s ashes, and spent time with family. It was sad, but it was nice to be together finally and look back at these old photographs. I hope to visit again in the summer and reminisce some more through more photo albums.

Having had the half term break, this usually means less students for me, and I only had two, so it would be a great time to buy some of my books from my Big Cartel. Also, if you’re based in South East London, I’ll be part of the Camberwell Arts Market on Saturday 19th June, 9am-5pm. I’ll also be doing some bespoke poems there; you give the ingredients, and I’ll create a short poem for you.

I’ll also be doing my first in-person live show on Sunday 4th July as part of Simon Mole’s Poetry Picnic at Arts Depot, where I’ll be sharing a new poem written especially for children, aimed at a slightly older age range, probably between 9-13. It’s just under a month away, so I’m sure it’ll come round soon enough!

Otherwise, I’ve been keeping up walking alright, not always keeping to the 10,000 goal, but enjoying some sunsets ping pong along the way. It’s also been nice being indoors again at board game cafes, and now the sun is peeking through the clouds now and again, I’ve taken a few breaks to sit in the sun and read. I’m currently reading comedian Rosie Wilby’s The Breakup Monologues, which I’m reviewing for The Norwich Radical, so technically it’s also working. I’m really enjoying it so far.

I was at primary school when I first learnt what the word ‘hypocrite’ meant. I remember because I recall shouting it at other players during after-school netball games. I say shouting, but I’m quite softly spoken and so maybe I wasn’t all that loud. But I remember one friend laughing at me as I said it. Those who get close to me will learn this strange mix of vehement-quiet-girl still exists within me (why I’m so excited for the Shy Radicals book).

It was when I was a teenager, that I began to see my parents – and adults in general – as human beings. With flaws. One of those flaws being that they were massive hypocrites. As a child who had school reports detailing my strong sense of right and wrong, it was only natural that I developed this idea that being a hypocrite was not something I wanted to be, and with that I found it hard not to be overly righteous in defending my views. I never believed that I would become a hypocrite.

But maybe I was wrong. If I am to analyse the details of everything I do, I regularly go against what I believe in. I can do a lot better. And although I’m taking steps towards doing better, there will always be things I do that don’t live up to my ideal version of myself, especially when it comes to making money. For example, my current day job is teaching English as a foreign language. It can be a very rewarding job, yet, a big part of me is also uncomfortable about the fact that there is so much demand to learn English. It reminds me of how privileged I am to have been born where I was. Such a small country, such a widespread language, such a horrible history of colonialism.

And here I am, post-Brexit, living in Spain, not able to speak the language – because if you know English, why bother with any other language? Even the one of your heritage. My plan, to return to the UK, hopefully better acquainted with Spanish, and focus on my career as a writer. I feel I haven’t given myself the chance to properly try to live my dream. For a dream, I know it will seem less of that in reality, that it will be a struggle. But then so is working full-time and trying to work in the arts as a second job. It’s time that I make it a priority.

And in doing that, it’s likely my morals may be called into question. I might still be a hypocrite, and I might face dilemmas. Except maybe the money will be too much of a temptation, because I already auditioned for an advert for Transport for London because it paid more than my annual wage at the time (I’m now earning about half that annual wage, but my mental health is a lot better and I’m living in my own apartment instead of with my parents). And this dilemma is if I am lucky. Whenever I have seen other poets at Buckingham Palace, or on adverts, I have been excited for them, knowing that (despite the moral implications) I would be honoured to be asked and can’t imagine doing anything other than accept it. Even if I did feel uneasy about it.

This is for the same reason that I accepted my first job offer after I finished my MA and stayed there for 4 years. Because I have been taught that things are so bad that I should be grateful for whatever I can get. But right now, I have taken a risk and applied for Edinburgh Fringe Festival and booked to stay at a hostel for a month. It’s nearly double my current rent. I’m trying to save, but I am worried about being able to afford it. I thought about applying for some extra work that would ease these worries – £1000 for a month’s work online – but in the end, I wasn’t sure I would be able to commit to it on top of my full-time job teaching.

So, to imagine the fee that comes with doing adverts, such as the Nationwide ones, knowing that it could enable me to live my dream. It would be too good to refuse. And as another poet pointed out, it is the system that is the problem, and most of the time we are just trying to live. I’ve worked for minimum wage for WHSmith, JD Wetherspoons and Sainsbury’s. It doesn’t mean I agree with what they stand for, so if I was asked to pen a poem for those same companies, would it be any different? Perhaps it would, being that you are publicly associating your own brand as a poet with their brand, therefore it is a kind of endorsement that isn’t as true being a sales/bar assistant, which carries with it an element of anonymity, of being part of a uniformed mass.

In the midst of debate around the Nationwide adverts, although admitting he respects the poets in the ads, poet Luke Wright sparked debate with his poem Renegade Poets, which I think is what was intended. It is not so much the poets in the ads being targeted, but rather opening up a discussion about what it means when we accept these opportunities, especially for those of us who write political pieces and are vocal about things like Feminism and Capitalism. ‘McGough is doing Waitrose, and Clarkey’s doing chips…’ Wright says, while acknowledging it’s not about one specific case, and that it’s not new.

He laments about the art that is lost, the compromise you have to have, when selling your work in this way. One line that struck me was: ‘if nobody wants to see your show, it’s probably not good enough’, because part of me thinks there’s more to it than that. For example, with She Grrrowls, the audience can vary widely in numbers, and sadly I think being a feminist night, featuring women, this makes it more niche. Then again, there’s also music and comedy, which are arguably less niche than poetry. I have also had a promotor basically tell me that I don’t bring enough audience to the show. Whilst that may be true, I would never say that to one of my acts. It’s rude and patronising.

Nevertheless, the sentiment harks back to that line in Wright’s poem. If you are familiar with Wright’s work, you’ll see that at least in this sense, he practises what he preaches. How do you make something good enough? You work hard at it. At the night Homework, as well as in his solo shows, you can see the effort that goes into creating quality pieces, and the poem Renegade Poets is a great poem too, with an ending that really drives the point home.

The point being to think more about making these decisions, instead of doing what I imagine I might do – just see the money and and say yes. So, yes it’s important to think about this topic, but at the moment, I don’t think I’m able to make a decision. I don’t think it’s necessarily wrong in all contexts, but something that comes down to an individual company and what they stand for, and the person making that choice.

When I did my MA in Creative Entrepreneurship five years ago, part of me thought that if I had the right tools I could be successful in the arts. I grew up with two teachers as parents and they worked hard in their field and have been able to provide me with a good life. I have become slightly disillusioned since graduating and working, that although we were taught that the “struggling artist” cliche is a myth that doesn’t have to be fulfilled, I still  know that by taking a risk later this year, I will living on the “cabbage budget” and may never see the “champagne budget”.

Disillusioned, but only slightly. I still hold on to my dream, and feel I have to give myself that chance. On another  related note, Roxane Gay recently pulled publication of her next book How to Be Heard after ‘alt-right’ Milo Yiannopoulos received a $250,000 advance from Simon & Schuster. It is an act of protest. She has been able to stand by her morals and principles, but she has also been quoted by The Guardian as saying ‘I can afford to take this stand. Not everyone can. Remember that.’ Whether these moral choices are something we can do from the start of our career, or whether it is something success enables us to do so is still up for debate. I may be a hypocrite now, but I will try to push myself and do better.

In case you hadn’t heard, Ideas Tap is facing closure on 2nd June, unless more funding is secured before then. As they have tried already to get more funding, this is obviously not a sure thing. This news came as a great shock to me, and I had taken for granted that Ideas Tap was a new essential to the picture of the arts today, something that would stand the test of time.

Sabrina Mahfouz has set up a campaign to save Ideas Tap from this terrible fate. A fate that highlights the reality of the arts today, a landscape where funding is constantly being cut, and a government that often devalues the arts, evidenced by these cuts. 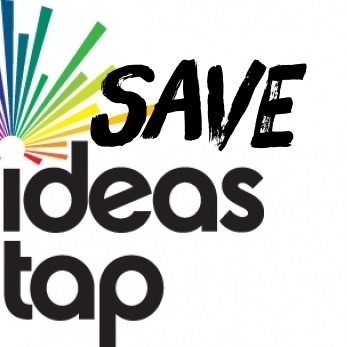 Please join the campaign and do anything you can to spread the word, in the hope that funding can be secured for the future. Share this post, make your own, and continue to show yours support the arts in any way you can.