I can’t believe a month has gone arrghhhh! I’ve been really busy with these things:

Whilst in New York, I went to the Nuyorican Poets Cafe.  I wanted to perform in the open mic but my parents wanted to leave before midnight and the slam didn’t start until after then and the whole thing ended at 2am!!  Another thing that was different to a lot of the UK events is its popularity – I have never seen a poetry event so packed.  It’s a lot louder as well, with people clicking and making noises like ‘umm hmm!’ at certain lines as the audience show their appreciation.  The host killed time as one of the feature acts was late by asking where people were from, my mum shouting ‘England’ with a hilarious amount of pride in her voice, and also made everyone dance 80’s style to flashing lights and music, which was so bizarre you couldn’t help but laugh along, attempting to move slightly in the crush of the crowd.

The performers were enjoyable, typically American, humourous, intelligent and passionate.  Although we left early, I got a feel for the night, along with books and a t-shirt.

While away, I did a lot of reading and finished Bright Shiny Morning by James Frey, Bossypants by Tina Fey, and How To Be A Woman by Caitlin Moran (long post response to follow). I recommend them all.  I’m now reading Laura Dockrill’s Echoes.  It’s like Roald Dahl for adults… or kids who swear.

Last night I went to The Tea Box and did the open mic, apologising for anyone who may have wanted to see me the last time (when I had to pull out ON THE DAY because of my stupid eye ulcer).  Sadly, the owners weren’t there for me to apologise to in person.  I went on quite early and was glad to be able to relax and enjoy the likes of Anna Le, Amy Acre, and Harriet Cramer (and also Peter Hayhoe earlier on) plus many other acts I didn’t know the name of.  Donall Dempsey and Janice Windle did a great job hosting as well.  Harrie got very drunk which amused most people.  She said stuff such as wanting tits, but the link says she has the same size as me but skinnier, but then I sometimes say the same thing about myself, especially when drink, and especially when my friend Helen is there.  I’m shocked to see my waist is the same… I guess that’s the difference being 6 inches taller affords.  Anyway, she is a beautiful, talented, lovely lady with hilarious and we should both get published.  Ideally by Harper Collins.  I missed being like that, as in, drunk… which reminds me, I read a poem inspired by a programme I watched on Amy Winehouse, written about 3 years ago, and, as I didn’t record the gig, here it is:

I want to build
myself up to the highest height,

Just to look down
at the fall and be filled with fright.

Prove them wrong
about my poetry.

Yeah, I want that
pretty face, with the tear stains on show,

Mascara up my eyes,
just so that they all know.

I want to be
perfect, to be a success,

I want to be one of
the best.

I want them all to
read my lips, read my mind,

Then drink myself
to destruction at the end of the night.

I want to fall in
love again with a good boy,

Just so he can
break my heart.

Because if I’m in a
mess, feel my life is destroyed

Then it at least
provides more material for my art.

And I can just pick
up my needle and thread,

Scrub with soap,
the sheets on my bed.

Try stitching my
life up to resemble what was,

Continue the search
for the Wizard of Oz,

Pray for a change
to a non-existent God,

That copied kinda weird.  Anyway, I read a poems from actual book things that are published and shit!  To look all profesh.  One was called Flowers and was in issue 13 of The Delinquent.  The next was I Am No Better from the Workshop UEA Undergraduate Anthology which you can buy from places like The Hive, The Workshop and WATERSTONES in Norwich.  Hell yeah!  I have a poem in a book in the biggest book shop in the UK; the one that is still alive!  Although, I couldn’t see it there, but I saw it in The Hive, and The Hive is one of the best book shops ever, Stephen Fry agrees.  I also did Cinderella by heart, just to, you know, show that I can sometimes memorize stuff. 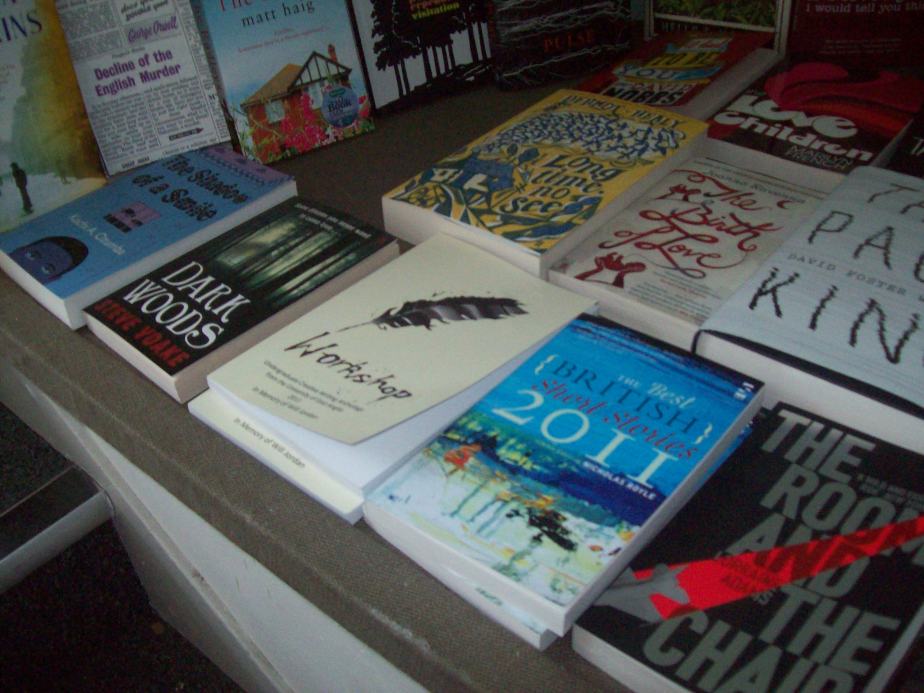 I think I shall end there.  Oh, also, i’m working at Bestival and need to know ideas for what I can go as on different days, the fancy dress theme is ‘Rockstars, Popstars and Divas’.  I just wanna  my own clothes but have things like a black messy wig with white streaks… think I may use it for Amy Winehouse, if that’s not in bad taste… which it shouldn’t because it’s like a tribute to her, because I like her music and she will be a legend, a legend ending in tragedy, but a ledge nevertheless.