After my first fringe run, it’s hard to know what I’m feeling, but, I’m so glad that I’ve done it. I viewed it as a learning experience, and wanted to sell some of the 100 books that were delivered to my hostel. I could just about fit the 50 books that were left in my suitcase, so I feel like I did what I set out to achieve. In celebration, I also got my first two tattoos: a heart on my wrist, because that’s where I wear it, and leopard print on my shoulder, to symbolise She Grrrowls. 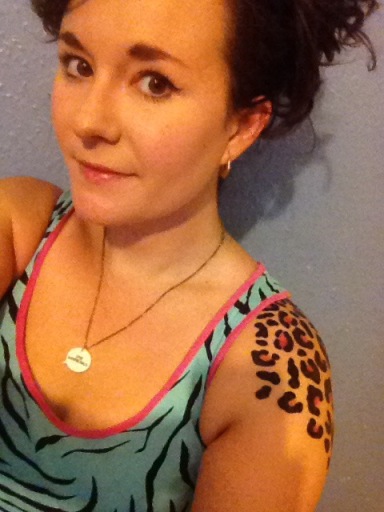 In terms of learning, I think I could have flyered better in terms of exit-flyering more rigorously. I did well with the Wee Blue Book, but the people taking them weren’t necessarily my audience, and I feel like people who would have liked it weren’t always reached. I tried to pace myself, but as a lone wolf, I saw more shows than people, and could have put myself out there more in terms of meeting other poets etc. Tim Wells bumped into me flyering and stressed the importance of networking, but it isn’t my best skill. For this, I was grateful for people like John Osborne who invited me to hang out at the Book Festival, which I didn’t know much about. Sadly, coming down with a cold meant I had to propose getting well again, but towards the end of the month I was also able to hang out with Tyrone Lewis and Jake Wild Hall from Boomerang Club, and met a few people through them. It was actually BC, along with Joel Auterson who inspired me to take She Grrrowls to the fringe having seen they did it the previous year.

The Fringe is so expensive to attend, even with a free venue, and so I wasn’t expecting to make a profit, or break even, but just hoped to have some money to help me get by. It had put me out of pocket for many months when working in Spain, and it was thanks to a week of teaching work in Wimbledon that I even had money to buy food. I have no savings. The only thing to alleviate the stress what when I secured a couple more weeks of work for September, and started to do interview for tutoring jobs from my hostel kitchen. I was paying over £800 for a mixed 6-bed dorm,  and although this resulted in many sleepless nights due to snoring guests, the location was perfect, and it was pretty clean with a well-equipped kitchen. Doing a solo show I think I’d need something better, but I managed to survive it. 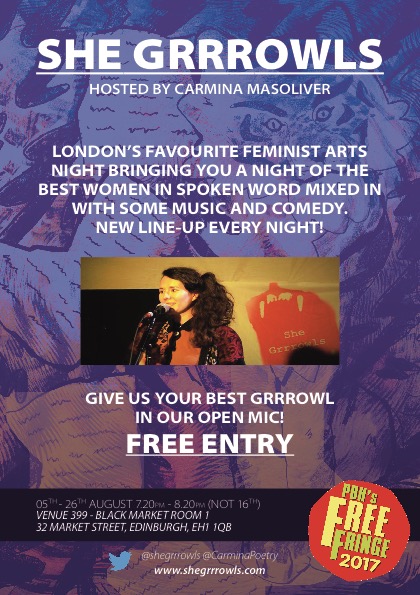 Initially, I was nervous about flyering, and not too excited to have to host the show. I found I surprised myself in both these areas. Flyering was okay when I could be myself, and there were hundreds of others doing the same. Hosting each night felt like I was training a set of muscles. However, there were a few times sexism reared its head. Once a man spoke to me about my event then asked to shake my hand. Except he brought it to his frog-like lips and kissed it. I felt violated. Then there was a time when a guy walked past, whipped a flyer out my hand only to throw it to the gutter – normally, not much to think of, except it seemed a deliberate reaction to the word “feminism” emboldened on the flyer. Just after this a group of guys I recognised (possibly fellow poets) approached me. At first they seemed friendly, but what they said to me was strange, hostile and intimidating. I doubted they would behave the way they did to a man, so regarded it as an act of sexism. And it wasn’t just me: Fay Roberts wrote an account for this problem here.

I did a few feature sets at nights such as Raise the Bar: Poetry Versus and That’s What She Said. Another thing I would have done would be more features and open mics, but this required more planning than I had realised, and I wasn’t quite sure where to look.  I did suffer from “fringe flu” at one point, which was when the wonderful Jane Bradley, host of TWSS, gave me a lovely bag of goodies like grapes and tea and lozenges. When I wasn’t flyering, seeing shows, or doing shows, I was writing reviews for The Norwich Radical (one, two, and three), and applying for tutoring jobs for when I returned to London. This means I’m going to soon become self-employed when I start taking on tutoring clients.

I saw so many incredible shows that it would be impossible to list them all, but I will try now, and did try to tweet about them all during the fringe (categories may cross over).

What Women Want by Amy Annette

Adele is Younger Than Us

How to be Good at Everything by Next Best Thing

The Conscious Uncoupling by Rosie Wilby

All KIDing Aside by Christel Bartelse

Molesting the Corpse of Traditional Masculinity Since 1987 by Henry Ginsberg

Shit! I’m in Love with You Again by Rachelle Elie

Above the Mealy-Mouthed Sea by Jemima Foxtrot

Circled in the Radio Times by John Osborne

My Cloth-Eared Heart by Melanie Branton

That’s What She Said

An Evening with an Immigrant by Inua Ellams

No Rest for the Lizard by Gecko

A Matter of Race

Struggle With Purpose by Patrick Shand

This Really is Too Much

Show Me The Money by Paula Varjack

At the end of the run I had a couple of nights still, catching the rest of the shows I could, and trying to do some non-fringe stuff. Having had a picnic for dinner on Calton Hill the night before, I treated myself to a lovely meal at MUMS after climbing Arthur’s Seat on my final day, and had my first try of haggis with a Full Scottish Breakfast the next morning (I spread it on toast and finished it, but I’m more of a hash brown girl). After cooking for myself everyday, aside from exactly two portions of chips and gravy, for the whole month, it was a worthy reward. I’d also been veggie the whole time, so meat was quite a treat.

Now it’s onto the next chapter – the book launch at The Five Bells in New Cross on Wednesday 20th September!