I’ve called this post rainbows because of the mix of sunshine and rain both literally and metaphorically. I’ve just come back from Latitude and have so much to get on with I don’t know where to start, so I thought I’d begin here. Here’s a summary of what went down, in the form of a list:

If you want to find out about it in more detail, you can read up on my article at the UEA Concrete website. In the article, I don’t mention that just before Latitude Rosy Carrick officially confirmed her performance at the event I’m organising. She’ll be representing the inspirational professional poet for the evening and I’m really excited to have her on board. I also had responses from a couple of other poets, so in order to thank them, here’s a little linkage to their websites: Hannah Silva and Sophia Blackwell. Hannah Silva is based in Devon at the moment therefore the gig payment would barely cover her costs (free travel for poets and musicians anyone?) When I got Sophia Blackwell’s email I had already accepted Rosy Carrick, but was tempted to put them both on… before I remembered I’m making quite a big loss on the event as it is. They’re all amazing poets anyway and I urge you to check them out.

Prior to Latitude I had a headline slot at the International Youth Arts Festival in Kingston, at The Cricketers pub. I had taken on some of the promotion and think I blew things out of proportion in terms of how successful they would be. Let’s remember, marketing is a full time job! I felt I did the best I could and spent a lot of time and money flyering, as well as getting it advertised on various online avenures. However, it’s made me rather shaky about the event I’m doing in August because there was a complete lack of audience. I don’t even know if one person came that wasn’t either one of the poets, came with the poets or was a member of the IYAF staff. I brought about 7 people along myself but I’m unsure anyone paid to get in. Although a few of the acts had actually pulled out last minute, the guy that filled in as host did such a rushed job of it that it came across quite disrespectful, even asking if we really wanted an interval and giving the impression he couldn’t wait to leave. I was bitterly disappointed with the turn out but everyone still gave a good show. I feel I have to take some responsibility for the lack of audience, but don’t know how I come improve on this for next time. Other reasons that were suggested were the location of the pub being residential, rather than in the centre of Kingston, and just the bad luck that was the rainy weather.

Another eventful occurrence before Latitude involved self-proclaimed Strident Feminist, Caitlin Moran and a little social media website called Twitter. For those who don’t know, Moran is the author of the book How to be a Woman, which I have reviewed here previously (although disagreeing upon some issues, I was extremely enthusiastic and fanatic about the book). Anyway, I had been linked the following convo via Facebook:

quantick: Just mistook a woman walking slowly down the platform for a train. caitlinmoran: @quantick this is the worse rape alibi ever quantick: @caitlinmoran I had a platform ticket I and a lot of people (mostly in the UEA

Feminist Society) were confused about this dialogue from the onset. Admittedly, I then received a lot of mixed views about the intentions here. On one big hand there is the simple fact that the initial comment had nothing to do with rape at all. This begs the question, why would a comedian (and a Feminist comedian at that) make it about rape? With the continuation of the joke, it makes an obvious comment on the excuses some rapists can make, along the lines of a woman “asking for it” because she’s perhaps allowed things to go as far as kissing or foreplay. Still, I was confused about the intention of the initiation of this dialogue, and thought it was problematic that someone hailed as a modern Feminist icon in Britain should be making light of rape whatever the intention. Someone from the UEA FemSoc group stated that “Jokes about rape culture – any oppressive system – can be used to mock and destabilise rape culture. Jokes at the expense of victims undermine VICTIMS” and this struck a chord with me – if that was Moran’s intention. I also saw this Twitter convo:

caitlinmoran: SohoGuy: @melissa1992 @caitlinmoran It’s not a joke about rape itself. If anything, it’s a joke about the absurdity of excuses of men who are rapists ….  @SohoGuy Bless you for being bright xx

Okay, I can admit that I have come round to thinking that Moran’s intention was to mock and destabilise rape culture, however, what I am unhappy about is how the lady herself dealt with the whole situation. She immediately blocked anyone (including me) who called her out on the joke on Twitter. The only comments I saw were things like “I’m going to have to sit on this chair for a while, and feel sad. about the world.” They came across as really sarcastic and like she didn’t really give two shits. All I wanted (along with a lot of her fans) was for her to explain her intentions and defend her actions. Although I’m still not sure that making a joke about rape whatever the intention is the best thing to do for someone that many girls now see as an authority figure on Feminism, but I am willing to debate it as I can definitely see how it can help dismantle rape culture. However, the way Moran dealt with it was rude and immature, and just really disappointing for a lot of fans, who were willing to listen to what she had to say and would have liked her to use the opportunity to open a discussion on the subject. At the moment this is a crucial issue since the release of this statement about Daniel Tosh. It would have been great to get Moran’s opinion on rape jokes in the comedy scene. For the record, this is what I wrote on Twitter that got me blocked: 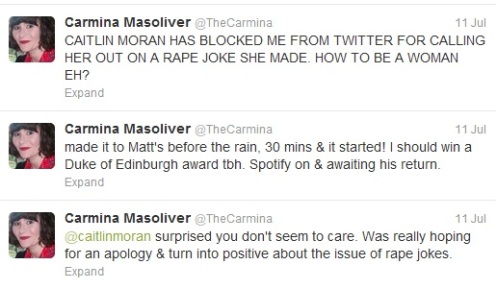 I also sent Moran this message on Facebook but have had no response:

Hi, Sorry to message you like this but I’m really disappointed about how you handled the reaction to the rape joke on twitter. A lot of us at UEA in the FemSoc really loved your book and just wanted an explanation/apology. As someone who has spoken out against rape jokes a lot of us were just confused about the whole thing. You have just blocked me rather than done this which just makes things worse. I understand you may not want the incident to reflect badly on you, but by ignoring the debate rather than engaging it’s not helping. I don’t think anything I said was offensive but I’m sorry if you took anything personally. I was confused and disappointed because you are someone that has made a lot of girls/women be like “yeah, I am a feminist”. So as someone who the public kind of take as an authority figure on the subject I just think a certain amount of responsibility should be taken with that. Given your posts about UniLad, this kind of thing just says to guys ‘hey, if she’s saying it’s okay then you must just have no sense of humour’. Please, don’t go down the Germaine Greer route. Note paragraph 5:http://www.squeamishbikini.com/2/post/2011/11/caitlin-moran-is-on-the-shelf.html. Also, we have 2 mutual friends so I hope you can take that to mean that I am cool and just wanting the best outcome. Thank you, Carmina x

Well, that’s quite enough of all that. Today I had a job interview at a school in Bethnal Green – how cool would it be to work around there? Very cool. I thought it went quite well but that I wasn’t as experienced or deserving of the job as others so didn’t expect to get it. I got a few phone-calls whilst on the tube on my way back from picking up my coursework and giving flyers to the Free Word Centre. I haven’t got the job just yet, but I’ve been asked to attend a session where I’ll be observed with a group of students. Scary stuff! Then I’m off to Margate for my Gran’s 70th birthday. Hopefully I’ll have time to make some meringues. I’ll be posting this a little after writing it as I’m waiting for my Latitude article to go up!

Edit: I’ve now found out I got the job! As of September I’ll be working as an English Mentor! Just need to sign the contract and hand in my notice to Sainsbury’s.