So, it seems fitting that this is only my ninth post about my time in Spain. As a person who likes round numbers, it leaves a door open for future opportunity to return. For this last post, I have complied a list of things I’ll miss about Spain, as well as those things I’ve been missing from the UK. I came to the country not even a beginner in Spanish, and have since done an online test (from a language school in beloved Battersea, of all places) and the test placed me as a Pre-Intermediate 3 (A2.3 on the CEFR). I have been in Spanish lessons all June, and spent last Saturday reading a story book at the pool, plus the doorman to my building just said I have improved (though he seems to say that a lot!) I’ve been to Granada, and will be finishing my trip in the beautiful Cadiz, where I’ve never been before.

So, it’s always around 10 degrees warmer here in Andalusia. That said, it is very hard to keep to a good temperature because it is so expensive. In winter, my apartment just has a choice between air conditioning and an electric radiator. In summer, it’s windows or air con. Bills have been expensive as it is, so it doesn’t feel like much of a choice. The fact there isn’t central heating makes as much sense to me as the UK not having air con (so, equally silly). The summer sun is more reliable here, but I’ll be back to the UK’s unpredictability soon enough.

Whilst away I’ve missed roast dinners, and despite getting my fill over Christmas, I’m salivating now just writing the word gravy (which, by the way is really hard to describe in Spanish – un tipo de salsa?). My favourite Spanish dishes can be had in the UK, and with that in mind, what I appreciate in the UK is the variety of cuisine, and it has made me want to try food from even more nationalities. Even with the summer heat now, the lack of gardens also means a lack of BBQs, which I’ll also look forward to sinking my teeth into on my return. What I will miss most is the availability of churros con chocolate, which are a dessert option in some restaurants, but here are a staple of any good cafe. As well as that, I love that sandwiches are generally plain (no mayo), and on massive delicious bread. Like this tortilla one. 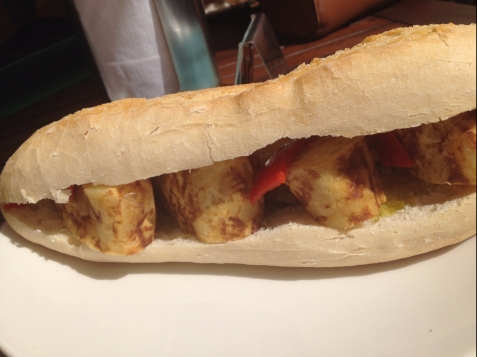 Anyone who knows me will know my chocolate and milk habit, which I have as an evening treat – a reward for my hard work. Milk in Spain is not the same, and generally tastes sweeter. I did manage to find a decent skimmed milk, and have recently been popping a mug in the freezer so it is extra chilled. On the other hand, I have no idea how I am going to fill the void of both still lemon juice, and tinto de verano or vargas.  Yes, I can get lemon juice in the UK, but it comes in relatively expensive cartons, and not the nice big bottles you have here, and you can get a bottle of vargas for under a euro. It is so fruity and has low-alcohol content, so it is delicious.

There is an Irish pub in Córdoba, but just isn’t the same. A good pub maintains what is meant by its full name: public house. They are cosy, family-friendly, and serve proper pub food (see: gravy). British children often grow up going to pubs, usually with a playground to accommodate them and I have many fond memories of The Leather Bottle, playing wit friends and eating salt-and-vinegar McCoys with a blackcurrant cordial. I’ve now changed that order to a pint, but what I will take back with me is the smaller measures in Spain. Obviously, they’re more liberal with the spirits (best gin con limón ever), but I love being able to get just a caña or maceta. I feel like I might start getting half pints when back in the UK. Another plus here is that you can get cheap tapas whilst drinking, and sometimes it’s even free.

I feel a great connection with Spanish music, and have also enjoyed some of the flamenco fusion nights, which are filled with people of all ages, often dancing traditionally. The festivals in May will definitely be calling me back. This kind of culture just can’t be found in the UK if we think about what is traditionally British in terms of dancing… Morris dancing? I’m sorry, but no thank you. In my opinion, nothing quite matches the dancing here, and I would love to learn the sevillianas so I can feel more of a part of it. Despite this, I know I can learn this dance back in London, because again, the UK trumps every time when it comes to variety. I am spoilt for choice having had the fortune to grow up, and still currently be able to live there on my return.

As much as I miss my family, having lived with my parents for the past five years, living on my own in Spain has been a dream come true. I paid about half my salary to live alone, but I relished this space, not to mention my independence. I’ve been eating less meat (mostly only when I go out), whilst meat or fish is a staple with every meal with my dad’s cooking. For the time I was living and working in London post-university, I started not to take lunch breaks, yet now having the long ‘siesta’ afternoon breaks (I don’t siesta), I have appreciated the importance of a proper break away from work at lunch, cooking my main meal during this time. Of course, this is made easier by living less than five minutes walk away from work. That glory is what I am most going to miss. Still, working in the day time is preferable, but it’s likely that any TEFL work I do back in London will be evening work too. That said, I find this kind of pattern means I see work as part of my day, rather than something to get over and done with.

I’ve made friends here, and I hope to come to visit them next year. That said, a year just isn’t long enough, especially with the transient nature of this work, and if I had better Spanish I would have liked to make more Spanish friends (a lot of the locals who engage with English teachers tend to be men…) I just wish I had come sooner, but like there aren’t enough hours in the day, sometimes it feels like there aren’t enough years in the lifetime. In some ways, I have found it difficult to be away from friends and family, and this was more so when hearing of the news of terror attacks, the Grenfell Tower fire, another fire in Bethnal Green where I used to work, and more personal matters, such as my Great Uncle passing away just last week. I was lucky in that I had friends and family visit, but I am so looking forward to seeing all my friends in the UK again, friends I’ve known from age four, from secondary school, from university, from poetry.

This brings me to one of the things that makes me feel most at home in the UK: our lovely poetry communities. I have already signed up to take part in the Poetry Cafe fundraiser. I’m also going to be at Edinburgh Fringe festival with She Grrrowls (Black Market Room 1, 7:20-8:20 pm). I am feeling anxious, but also excited. So many of my friends have achieved such amazing things in the time that I’ve been gone, and I just can’t wait to see them doing these things (and join in a bit too, hopefully). There’s so much that I want to do, including continuing learning Spanish, and although I obviously won’t be able to do this in the same way without physically being in Spain, to have only been to one poetry event, this is possibly the number one thing that I missed in the time that I have been gone, because I was almost starved of it.

So, I leave here in July, relating to this quote from Suzannah Weiss: Few are familiar with the concept of going somewhere, loving it, and, nevertheless, leaving.