This weekend was a relaxing one. It started off a bit tricky in terms of getting to the correct bus stop, but despite the traffic, it took an hour and a half by bus as predicted by Google. We are at the first place we saw – it was an overpriced but edible beef fried rice.

We took at taxi to Lựng Xanh waterfall. We walked beside the gushing waters, following its pathway upwards. We got to a place where locals were playing in the waterfall, and we joined them, sitting amongst big boulders, redirecting the water’s path over our legs. 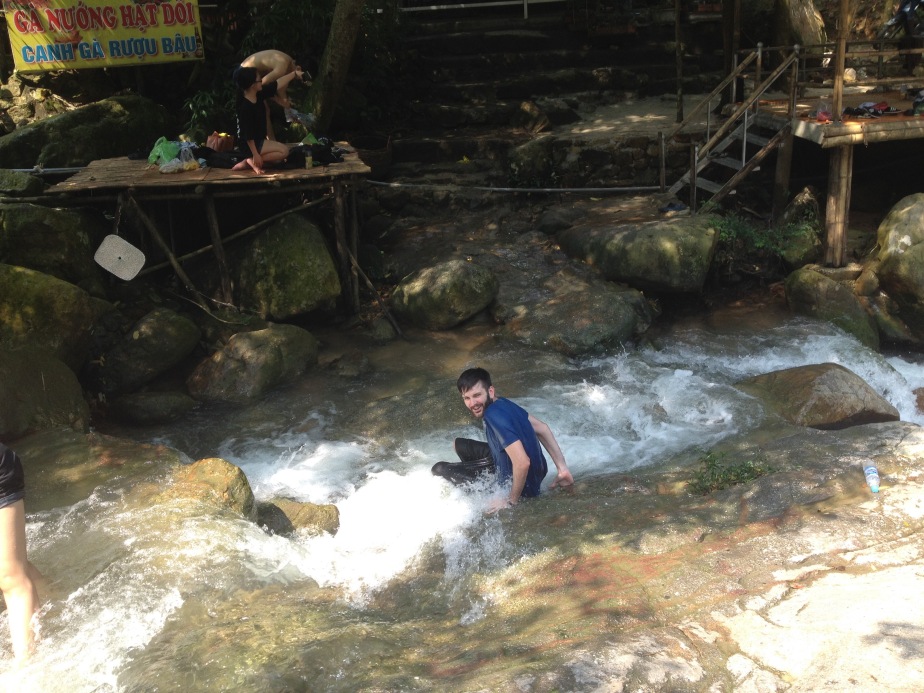 We continued the walk, incredible mountains surrounding us like we have experienced much of the time in Vietnam. We can back round to the start, where we had seen two pools of water filtered from the waterfall, which continue further down. We hired a hoop and decided to skip the temple and spend the rest of the day swimming.

We were invited to share pomelo and spicy salt with a group of family and friends, who then took selfies with us, as did a big group of visitors earlier. We tried to call a taxi, but needed help and the park attendant helped us. We managed to get dropped back to a bus stop and ended up on a bus that cost us 100k each instead of the 27k we paid on the way there. But it was either that or maybe not get back!

The next day we swam more at the hotel pool we go to sometimes. We ate somewhere nearby, which was nice. I’ve been working hard the last few days, but even at a local eatery we were able to try frog and it was actually delicious. The legs were the best part and it does actually taste pretty similar to chicken!

We’re now planning on going back to Cat Ba and Hanoi over the next couple of weeks. Then we’ll have four days to go away and we don’t know whether to go to Sapa and have two days there (due to having to go on an overnight bus) or to go to somewhere in the south by plane in order to make the most of the time. Any tips would be great as we’ll be going elsewhere afterwards.