The other day I went to an event held by the poetry collective Dirty Hands, in Tooting of all places! I grew up in Tooting… well, slap bang in the middle of Tooting and Earlsfield.  I walked down my old street (Garratt Lane) for a trip down memory lane.  There was a new place called Mel’s Cafe Bar which said something about “vintage beats” and looked quite cool!

Although it was a bit strange to see Amy Acre and Keith Jarrett performing in the middle of Tooting market, it was lovely, and is a really positive thing.  Much as I love East London, as I don’t live there (who actually does?!) it can be annoying having to trek there for anything creative and unique.  Tooting is moving up in the world.  And I want this badge really bad, because it says “Tooting is the Epicentre of the Universe’ and it reminds me of my childhood home.  It’s nice to have that because my parents moved the year before I went to uni, and then I went to living in two places (i.e. my Norwich house) and I can’t complain, but it’s just not the same as your childhood home.

I was with my friend Chi-Chi, and we then went to Wimbledon because Tooting isn’t posh enough to have Waterstones or The Body Shop and I needed to buy my mum’s birthday present.  I got her the cocoa butter she loves, and they gave a discount so even got an extra thing free and the whole lot was cheaper.  I also got her some clear nail varnish and a book token.

I got the NME for the first time in aaaaaaaaages!  I haven’t bought magazines in years.  I’ve been quite excited that it came out so recently and on Tuesday there’s a playlist of a few new songs… I am so out of touch!  I flicked through and saw a bad review for Sound of Rum, which I found really upsetting.

I haven’t heard it but it’s pretty ignorant of Noel Gardner to comment about her lyrics and ‘poetry slams’ when I’m pretty sure he hasn’t got a clue.  Calling her accent ‘mockney’ is taking the piss, because that’s just her fucking accent!

Some people don’t seem to understand that there is no such thing as just one “Londonaccent” – the beauty of the city is the different sounds you hear, the diversity of accents that creates such a range of accents that stand for the city.  It brings me back to Charlie Dupree’s poem from a couple of weeks ago that was just so fucking spot on!  It’s something that pisses me off, because I don’t fit into a rigid category of what non-London people think of as a typical London accent, I don’t know, people can’t work it out?  In Peterborough I spoke to a perfectly nice man, but it annoyed me that he said ‘you’ve lost your accent then!’ as though I had developed a Norwich accent in three years of living there!  It’s quite insulting as I have grown up in London all my life (with a brief stint in Reading, perhaps before I could talk), I’ve loved living here and am proud of where I come from.

My accent is a product of growing up to a Northern working class mum who constantly tells me to put the T’s on the end of my words, and a middle class Londoner dad, who himself makes fun of my Gran’s loud, enthusiastic and “posh” voice.  It is a product of having grown up in South London, going to local state schools, making friends with people from a great mix of backgrounds and cultures.  It is a product of listening to the Spice Girls, and watching American imported TV (I say ‘like’ waaay too much) and having my dad play bands like Blur, Coldplay and The Beatles.  It is a product of being shy and building the confidence to project and accentuate my words.  And sometimes, it’s the product of drinking too much and getting a bit lary and slurry.  And I hate to bang on about it but it riles me up!  As I’ve stated before, a frex off mine from the “cockney” band The Ruskins makes fun of me being a ‘posh git’, yet another guy I know from the amazing band Grenouille has referred to me as ‘cockney’.  The point is – I am neither of these things… my accent is just pretty normal and not strong in either direction, so there’s no need to put me in a box! 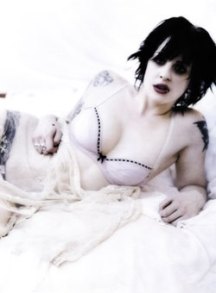 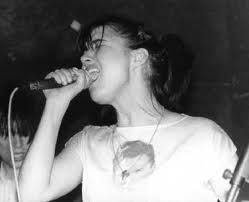 Matt, from Grenouille also said something about a mix of strength and vulnerability.  I really liked that, cause that’s what I’m about really, and that’s why I was saying earlier about my version of feminism.  To be a feminist, you shouldn’t feel the pressure to be this perfect emblem of strength and womanhood – it’s about being yourself, whoever that may be, and finding the strength to show the world who you are, and having the support of your sisters (and feminist brothers) to grow in confidence and love for humankind.  It’s why I’m inspired by the rawness and honesty and passion of people like Brody Dalle, Courtney Love, Alanis Morissette, Kathleen Hanna… and bringing me on to my next point… Kate Nash.

I already knew most of what the NME interview told me but I thought I’d mention it.  Ironically, it was the frex I mentioned earlier that was really into Kate Nash, here’s a pic of us at her gig.

I think I’m actually a bigger fan of her than him!  I loved her last album and, whilst the old one reminds me of when I went out with my friend, this second one has more positive associations for me as I can feel like it’s just for me, and I love the way she takes something negative and turns it into a message of hope… epitomized in the lyrics ‘take my life… to a higher plane’.  Anyway, I think it’s really positive what she’s doing for young girls and I wish I had someone like that when I was younger.  I’m a bit wary of writing too much about her, because I know she knows a lot of poets and if I ever bumped into her it’d be a bit cringe to come across as some major fangirl!  But, I do have a lot of respect and admiration for her.

To end this post, a sad note.  I’m listening to TV on the Radio atm.  The bassist died of cancer last Wednesday.  My dad had emailed me their new video whilst I was in Norwich so it was really shocking and I had no idea. RIP.