At the end of the conference we gathered for the final speeches and the Emma Humphreys memorial prize giving. Much of it was very moving, as well as being informative on some of the work that is happening with regard to violence against women. I didn’t feel it packed a punch in the way that other moments of the day had for me, but this was probably just because the opening talk had been so important and eye-opening for me. Along with the talks on shadeism and men’s role in Feminism, I’m now looking to build upon areas where there are gaps in my knowledge and experience, as opposed to reinforcing what we already know. That said, it is always needed to rally up support with speeches like this where there is a resurgence of energy, to keep us going, to keep us fighting.

I also really enjoyed Sabrina Mahfouz’s poem, which incorporated different parts of the day that she had experienced. Possibly out of paranoia, I had been wondering why I was not seeing the successes of some other poets, and worried that maybe I have been to vocal about my views, that I was being labelled to extreme. In person, I have faced little opposition, but still some opposition, to She Grrrowls – I’ve been told that the logo is scary and off-putting, that I’m creating a problem in what is already an equal community, simply for featuring women in the arts at my event. So, it really helped me to see Sabrina Mahfouz up there, proud to be a Feminist, yet also managing to be an extremely successful poet, amongst other things. Since feeling this fear that I would be jeopardising my career by being so outwardly Feminist (a fear that was expressed in the conference to explain why women would not use the label), I cannot express fully my gratitude at seeing Mahfouz take to the stage and be involved in the Feminism in London conference. 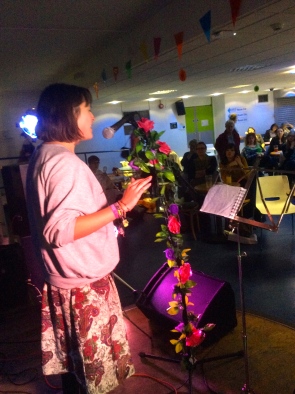 After the conference, we headed to the SU bar for the after party. I was joined by Rose Swainston and Maeve Scullion (pictured above) to represent Kid Glove. Kate Smurthwaite was also featuring; I mentioned something I found problematic in my earlier post, but other than that, she was the performer I most enjoyed that evening. I also enjoyed the other poetry act, Mabel, and the women who sang Spanish and English songs on her guitar. I felt proud after knowing ‘mujer’ meant ‘woman’ (sadly, due to Duo Lingo, not my Spanish heritage). Without wanting to dwell on negatives, I was really taken aback by a woman who, after a poem on personal experience of a rape-joke, called out ‘I’m not clapping to that, it was awful.’ And soon after, said to another woman ‘are we going?’ She was very near the stage and she didn’t try to hide what she was saying – quite the opposite. I felt close to tears, but as we were rotating poems between the three of us, I had to put it to the back of my mind and tell myself she must not have understood the poem. I stayed for a bit of the Stepney Sisters, but left early as I was tired and had a long journey to go back to the suburbs. I’m already looking forward to next year’s conference and wonder where I will be on the journey of Feminism then.