It’s taking a while to get used to living in Haiphong. As I write this, I’m ill with a stomach bug, which I think I got off my boyfriend, but now he’s not feeling 100% either, so there are many ways to contract it, and it seems like most of the other summer teachers are suffering too! One was even kept in hospital for a while due to dehydration. At the moment, I’m still able to carry on with my day-to-day life, which is good because I don’t want to miss any work and make other teachers cover me as it’s a lot of work for everyone as it is. It’s actually the first time in my life that I’ve experienced stomach cramps, and man are they painful. There’s no logic to their appearance and sometimes they will just randomly spring up on me in the middle of a two-hour lesson.
I have a one-hour observation after my 15-minute pop-in on Sunday at 7.45am so I just hope I hold out for that! I’m working about 12 hours a day at the moment, in order to get on top of things and have Thursday mornings off. So, I’m using this morning to try to rest and write this after staying up until midnight marking tests after finishing at 9.15pm. Despite me working hard, I am enjoying it and feel relaxed when teaching, having thought for years that I wouldn’t be able to be a “proper teacher” with big classes. The job isn’t too stressful – only when there are lots of power-cuts and when being observed!


Anyway, onto more interesting things! I put up a notice about going to the local CGV cinema in the Teacher Room and went to eat with a couple of teachers, and my boyfriend, before going to see “Equals”. I loved the film and the cinema does great popcorn; my boyfriend and I went back on my days off to see the new Ninja Turtles film, which I didn’t like quite as much. Most evenings I’m too tired to do anything, but it’s amazing being able to walk to both the cinema, supermarket and to work within five minutes. This is the difference between travelling and living somewhere, and I’m glad I’m getting to experience both.
On my last weekend off, my boyfriend and I went to Do Son Beach. We took a taxi to the bus stop and rode the bus for around half an hour. It had air con and Vietnamese music, so was a fantastic experience in itself, just to listen and stare out the window. One of the things that strikes you when you get to both Hanoi and Haiphong is the topiary along the roads. I tried to take a photograph of the dragons as we passed but it was very difficult! There’s also paintings and mosaics that can be spotted now and again.

I had heard Do Son beach wasn’t great and read lots of bad reviews about it, but as a local beach, only a bus ride away, it will do for me! The part we went to had a big tree where we sat on deck chairs in the shade, and the sea looked blue enough to swim in. When we got in there, it was cloudy, but we knew this was to do with the red river the water passes through, and it wasn’t “dirty” as certain reviewers had described, but it did make us worried when we felt things slide past our skin! We ate a beach-side restaurant, but it was disappointing and afterwards I wondered if it contributed to my illness! Then again, we also had to walk out of a buffet in Haiphong because the food was cold, and so that could have been it too. 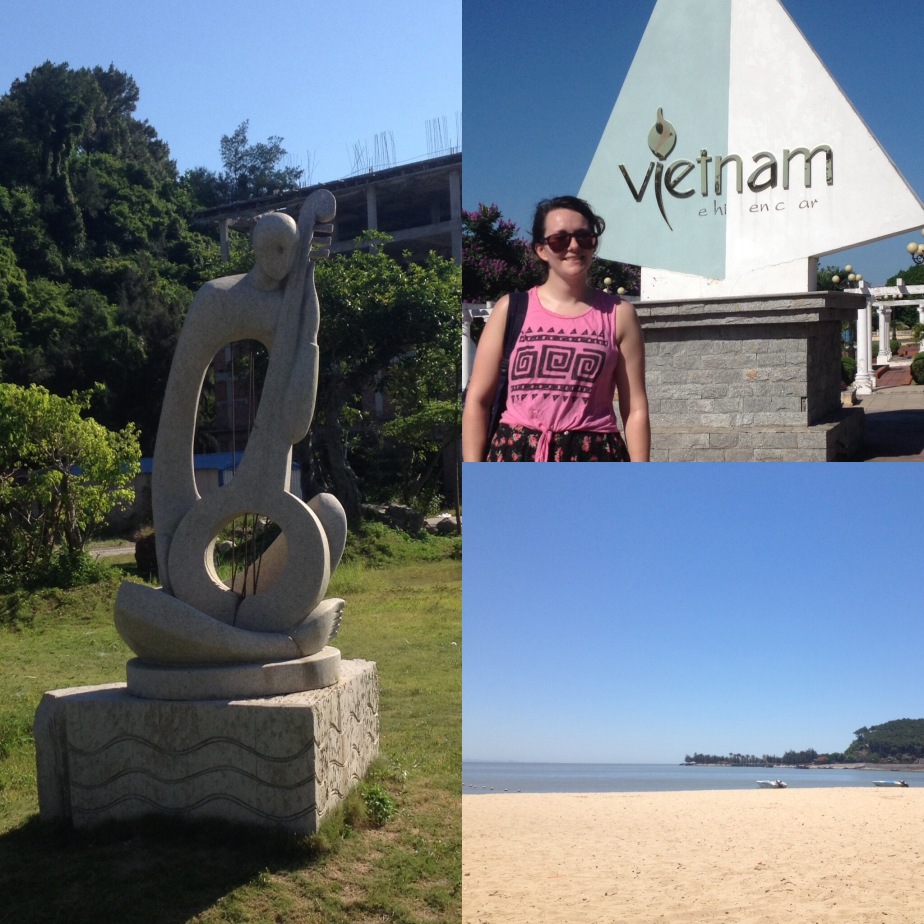 We swam a couple of times at Do Son, I continued reading my book, which I’ve now been reading for over a month, which shows how busy I’ve been over this time, because I am really enjoying it (Wild, by Cheryl Strayed). After drying out a bit, we walked for a few hours in the sweltering heat, came across some more beach areas, and it was around 4pm that we walked back to the bus stop and saw more locals than before in the water swimming and playing. I’d definitely go back, but next weekend I want to go to Cat Ba. This weekend, beginning at 7.30pm tonight, I want to relax and recover… and prepare for Sunday’s observation!


My boyfriend went to Cat Ba and said how amazing it was, so I’m looking forward to going there myself. Whilst he was there, I had to work, but managed to go to the Finnish Village for a party. I went to eat at a local stress restaurant and it was so good – it tasted how the food here should taste! A lot of the meals here have been mediocre, but this was delicious, even just having cabbage stir-fry! Yesterday I also went to a place where I have decided I will go every Wednesday lunchtime before my 6 hours of back-to-back teaching. It does prawn or beef pancake rolls that you dip in the most amazing satay sauce (one of my favourite things in life). Last Thursday I also had a “foot” massage and as of next week, I hope to make this a weekly thing. It started with feet soaked in hot water, but they massaged basically everywhere else as well as the feet, and it even included hot stones.
Two more lessons now before my weekend starts!