Right, because I’m at my London home and using the laptop I spilt water on that doesn’t have the letter ‘g’ (and it’s nearly 1am) I’m going to try to keep it short and sweet.  I’m writing it slightly annoyed because I wanted to say something and can’t remember and have been trying for ages to remember grrr!

Last night I SANG with my frex Will Gardiner who played the guitar for me.  It was for the Late Shift at UEA’s Sainsbury’s Centre.  After years of wanting to do this and being to scared to do it, it was actually not any scarier than reading poetry.  There were some other amazing performers and was really happy to be included in such a fantastic line-up.  Check all these people out: Jamnesty, Rachael Durrant, Vince Laws and David Osbiston.  And if you want to look at how it went for me, you can watch  the video on YouTube… though listening to it myself is a bit cringe and it seemed way better at the time haha.  Also, I was aware I messed up some of the words as I was doing it so that’s never nice to hear.

I continued the night with my friends Helen and Laura, and so it was a proper last night in Norwich.  I came home for the Farrago gig by train and it was long and I had a heavy suitcase, so pretty tiring.  My mum picked my up from Worcester Park station, and of course, when I walked past the traffic, a load of guys were being “ultimate lads” aka “ultimate tools” and shouted out at me ‘alright schweetheart, need a hand?’  I didn’t respond at all, even if I came up with a witty come-back, it would just be giving them what they wanted.  I was in a weird mood, maybe a delayed reaction from talking to a friend earlier about something that’s been frustrating me for a while, combined with nerves and disappointment that I didn’t think anyone was coming to watch me.

However, I was mostly in a positive frame of mind, just had a mini-stress-out.  I’m looking forward to tucking into the best Easter chocolate as well – dark chocolate egg and lots of creme eggs! 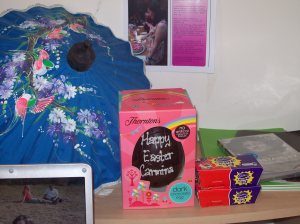 So, tonight I had a huge surprise coming out of Goodge Street tube station.  An old college friend, Janet Etuk, who was not only there… but there to see me!  And, even better, Anya Destiney came along too – the girl who you could say is responsible for everyone having to endure me read poetry!  Both girls are mighty-fine actresses as well so keep your eyes peeled!

The other features of the night were Charlie Dupre, Fran Landesman, Clair Whitefield, Sharnika Power, The Wizard of Skill, and AF Harrold.  Charlie, Clair, and Sharnika were all unfamiliar to me and they were incredible!  Espesh, Sharnika, at only 16, she was unbelievably good, so confident and intelligent.

I forgot my camera, which was a shame, since I actually had people to record it for me, and I think it went quite well… though it was cut really short.  Anyway, I thought I’d start posting more photos and stuff to make this more interesting and personal.  Part of that will be pictures of me haha, basically, I’m quite into style (I’m inclined to say style rather than fashion for obvious reasons) and any attempt to go to poetry readings in just a jeans and t-shirt combo never really happens… I like dressing up, and maybe coming from a “dance background” it makes me see it more as a performance with costume haha… that’s why the up-coming Glam Slam is exciting!

I’m wearing a yellow Passenger t-shirt (it was quite cheap at some shop, and I got my friend Natalie Cooper a similar design) with a standard red h&m cardi, and not shown in the picture, a high-waisted black skirt.  Note the badge from Russel J Turner, reading “all you pretty fuckers”.

Okay, that took just under an hour.  I have lots to occupy myself with tomorrow and will hopefully be swimming again, with my mum.  I went the other day in Norwich and it was really nice.  I kinda wanted to go to Tooting Bec Lido but my mum keeps changing her mind.  That reminds me, there’s poetry stuff going down in Tooting, which is where I spent most of my childhood.  If anyone is near 833 Garratt Lane, please ask for my Barbie dolls, I miss them.