My main attraction to Vang Vieng was for tubing down the river, having seen my friend do it on her travels. I didn’t quite get that it was meant as a party destination, and with a non-drinking boyfriend, that wasn’t really what I came there for – hoping for more nature than anything else. As I write this, I’m on my final night, sitting on the balcony of a private room, looking across at mountains and trees, the flow of the river Nam Song below.

The first night we got here, we decided to cancel the Organic Farm once we found it wasn’t central. It had said it was central online, so I felt a bit cheated, and having spent seven hours on winding roads, albeit with fantastic views, we just crashed at the first place we saw. I booked Chillao Youth Hostel as it seemed like fun and the breakfast looked great. However, I was then kept up by horror stories from my friend and people online about this hostel – people drinking whisky at 10am, peeing and vomiting up the walls and in showers, as well as staff stealing from someone’s private room. That I night I was kept up by drunk people from Gary’s Irish Pub, but more so my own anxieties about what could happen at the hostel. I made a swift decision at midnight to cancel and then try to get our booking at the Organic Farm.
The next morning, we get a tuktuk there as soon as we woke up. We were tempted by the balcony and the swings at. The bottom, but regret not picking the cleaner and air-conditioned room. It also had twin beds, and sharing one fan has not been fun. I feel pretty silly for staying near the river too, as my blood type (negative O) means I’m more prone to bites, and being in a country that is high risk for malaria and dengue fever adds another layer of anxiety to being covered by these horrible sores. There were also holes in the mosquito nets, and the bathroom had little protection from insects getting in, meaning lots of ants were everywhere. We had a nice breakfast (which I was shocked wasn’t included at all, considering the price of the place) but it took a whole day for it to be removed – ants were everywhere!

But less about the accommodation, and more about the place. At worst it felt like it could be anywhere that they’ve stuck a bunch of tourist activities on, and at best it was a haven of relaxation and fresh air. It’s been eventful… which is why we needed a but of a beak this afternoon. The first day we went back into the town, and by the time we got round to doing that, we ate lunch before doing anything but walk around the area. Initially just wanting a snack, I got a cookie and drink from the bakery, which was really good. We ate far too many times at a place called ‘Arena’ – we could have had cheaper meals, but this one tasted so good, especially the chicken satay, spring rolls and Pad Thai.

We hired bikes afterwards, once I realised I had a photocopy of my passport that one place took – you need it as a despot to do basically anything, but I’d read that it was dodgy to do this, so wanted to avoid it… plus, we had forgotten our passports and Organic Farm is a 45minute walk, which we had just travelled for the purpose of hiring bikes. Anyway, it was the first time I had ridden a bicycle since I was at least eleven years old, so about 15/16 years ago! It’s true what they say… I was able to do it all right, though my bum ached (and still does). Even in the rain I loved it. I felt like a child again, getting wet and not caring. In this rain, you would also see Lao children playing, naked in the street. In fact, on our journey down there were a few kids slipping and sliding in the rain. We dried off and changed before heading out again. Luckily, the rain stopped, but we tried to go to the waterfall and failed to make it before we had to return the bikes, but it was worth it for the scenery alone.

The next morning we went tubing. I got a little scared at times as I seemed to go down a lot faster than my boyfriend, and I guess I was just afraid of the unexpected – if I did it again, and if there were more people doing it, then I’d have enjoyed every minute. Some parts were like Rapids, but once you realised it wasn’t a waterfall you were hearing, those bits were the most fun. We followed the very small crowd of people from bar to bar, and the second one was the best – drinking Beerlao from a hammock and chatting to others was great fun. It was easy to see how you could spend the whole day there. But we spent about 4-5 hours doing it before we saw the sign indicating the end. There were two cows chilling where we were meant to get out, so we got out a little later beside the kayaks.

That afternoon we got a motorbike and just rode through the mountains for hours. It was like Cat Ba, so beautiful and hard to capture with cameras. It would be have been perfect, but there was a moment where I fell off the bike, thankfully it was still and I was just trying to get back on. I rolled down a hill, and by this point I ached a lot anyway, so the sunset was a little tainted by this, as well as having to rush back to drop the bike back in time. We ate at a place near the river which would have been nice to chill out at, but since moving to Organic Farm, we couldn’t risk staying too late. The night before we had walked 45 minutes, which wouldn’t haven’t been so bad in the cool night air, but the only light we had was from passing vehicles. A tuktuk back cost about 50k, which is around £5, so basically £1 a minute! 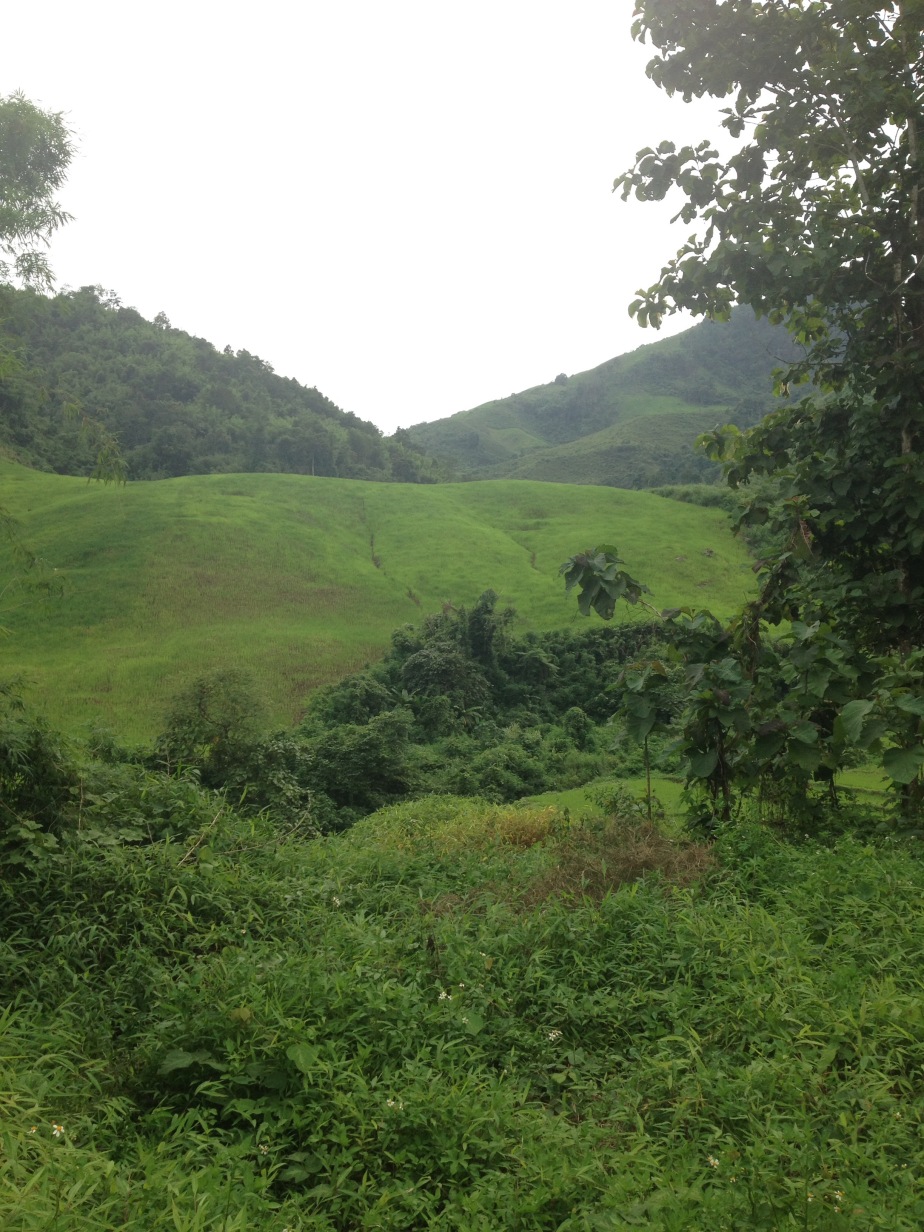 Anyway, it was a great drive with amazing views, and I took this photo which really captures of the lively things I’ve found in Laos – family life, cute children and, in this case, paternal love.

Today has been tiring and stressful, but at the same time had its good points, having had new experiences. We rented a buggy out for off-road travel, but we hadn’t considered the rain would make it very muddy and had no protection whatsoever. I’m now praying my phone still works after my not-so-clever boyfriend sped into a muddy puddle just after telling me to take a photograph of the surroundings… I didn’t have much fun after that, especially as I was then bombarded by muddy puddles, and later on drier muddy ground, I had big chucks of mud flung at me. Needless to say, I was horribly muddy, and then when we stopped off the crawl into a cave, I could only half enjoy it, just wanting to be back on dry ground. The wheel of the buggy had no mud-guard, so I had it worse than my boyfriend, who drove us around, and the smell of petrol was a bit concerning, to say the least. That said, I also took the wheel for a bit and  it was really fun, just a shame the mud ruined things. On the way back we were held up by a funeral procession, and eventually after stopping behind it for a long time, had to go through the crowd, which was really embarrassing! It was interesting to see that a lot of women were dressed in white, there were monks leading the way, and a white casket was decorated with elaborate designs and carried on its own transport. Others followed behind on foot in multicoloured clothes. There and back we had to cross two bridges, one of which was extremely rickety and we worried about making it over! 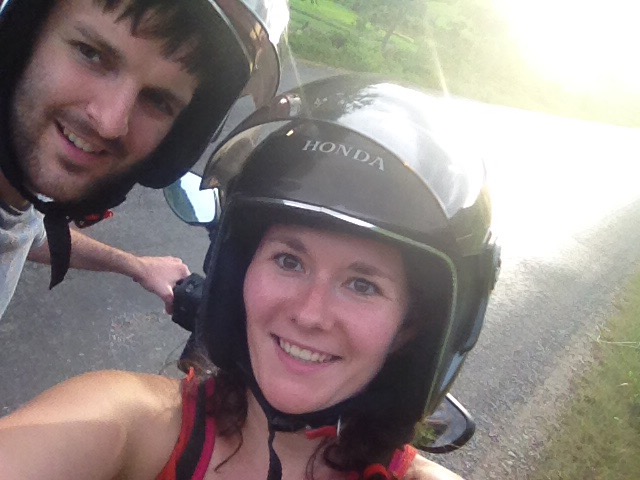 As I’ve said, it’s been eventful, and there are maybe some things I’ve missed out. For instance, at one point, my boyfriend nearly stepped on a snake when we were getting into our accommodation, and a massive spider fell on me at dinner once. We will probably have a wander around the farm here, and then get an early night for our return to Luang Prabang.