We arrived at the site of Bobby’s Jungle Tour and were shown to our little green house, amongst different colours cabins. At this point I’d met one of the tour guides and the guy who runs the place (a Mike, not a Bobby) and I was also reminded of what I had forgotten to pack – my swimming costume! My mood plummeted at the thought of missing out on swimming in a waterfall, but rose again when told there was a “Tesco Lotus” that would probably have something. It was interesting to see the fresh fish and meats available in a market-style way that we wouldn’t get in the UK, but there was no swimwear whatsoever. I had to make do with a sports bra and a pair of pink shorts. I picked the largest size, knowing they only go up to a UK 10 or 12.
The sports bra came in handy, as in such hot and sticky weather it’s far more comfortable than a regular bra. However, the purchase ended up being useless. Our first stop was meant to be a small waterfall, with a natural spring that we could swim in. The dry weather coupled with the fact that it had rained for an hour — stopping just seconds before the start of our tour journey — meant that the water in the spring was very murky. We were told we could instead swim where lots of Thai locals were swimming, but to get there it looked like you had to go down a wet, muddy bank and swing from nearly-breaking tree branches to get there. My boyfriend impulsively decided to join a group of young Thai boys in jumping from some rocks. The group was generally slippy just walking to the view point, and my heart was in my mouth as I watched him speed over to the side where the rocks were. It looked too dangerous, though part of me wished that I took the risk in the moment. Instead, I became camera-woman. I have a very rubbish camera, plus my iPhone, but for these I took my boyfriend’s DSLR (I think that’s what they call them… the ones with the big lenses). 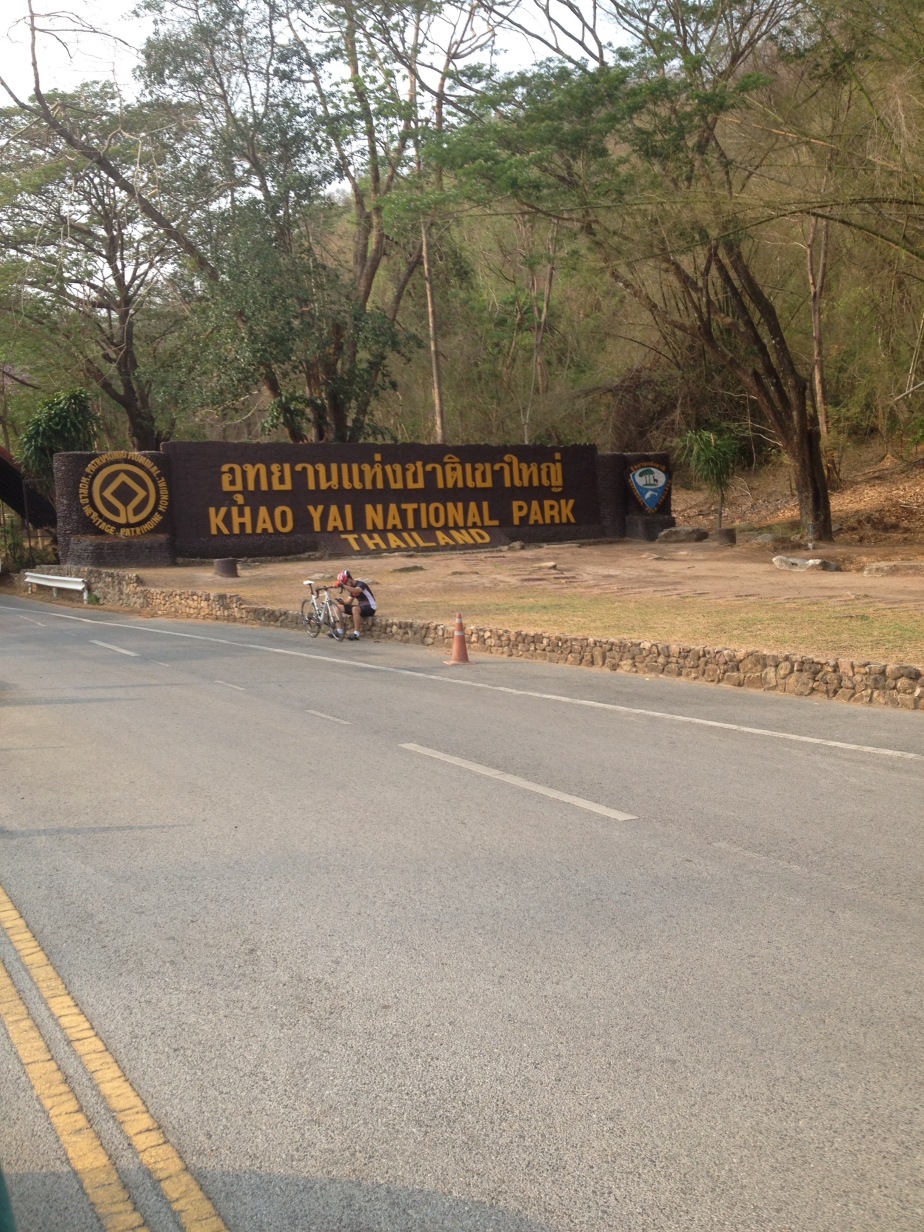 I could see from the distance that he had become unsure of his actions, but was being encouraged by the Thai boys to do it. I don’t know whether there’s a kind of recklessness in Thai culture (see the parents hanging their children of the tree here, or piled on motorbikes without helmets), or whether it’s due to something I heard about the brain’s development meaning people under 25 take more risks. I’m about to turn 27 and the biggest risk have taken is quitting my job for a short-term contract in Vietnam, and since securing a year’s contract in Spain. Anyway, after a short half-run up to the edge of the rocks, my boyfriend did it. He jumped off and plunged sideways into the water (leaving a big red mark on his pale skin). Seeing his head bob up again in the water stopped my nerves, and it was a lovely sight to see him with the Thai boys, who them helped him back up. He returned muddy as the rest of the group went back to the songthaew. 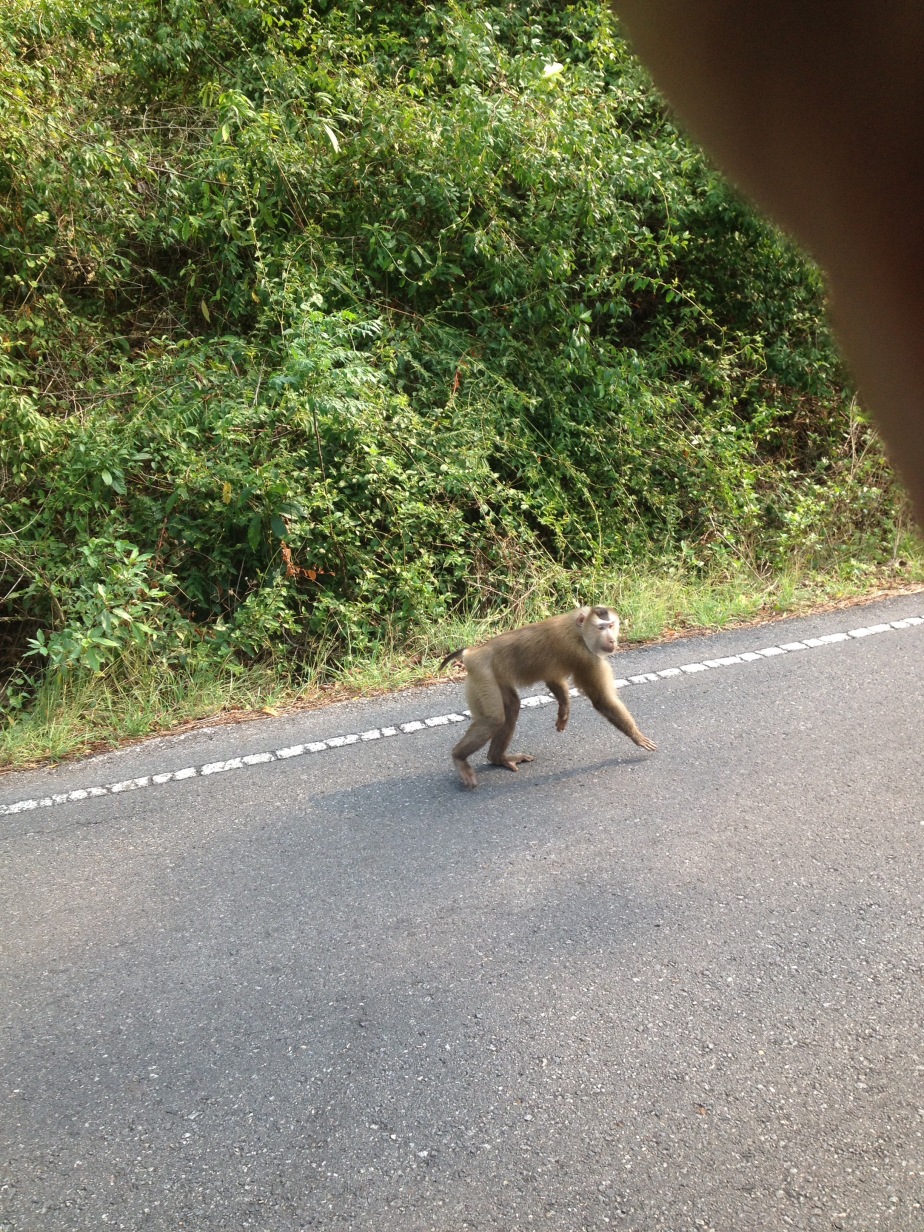 We made our next stop to a bat cave, where we were equipped with torches to look at the hundred of bats hanging and flying around the enclaves within it. At this sight there was also a monk resting nearby, and a tower with drums and bells. You could still see the thick hair still on the animal skin of the drum. My boyfriend climbed up the bell tower as we were given complimentary watermelon (Thailand has officially the most flavoursome watermelon I’ve ever tasted). He banged the drum and a bell or two, and then started to get into a rhythm. Again, it was great to see the smile on his face, that he was really making the most of it. I wished I hadn’t felt as self-conscious, and wary of any time-constraints or what other people wanted, that I had given the bells a ring myself as this was one of high highlights from the tour.

My highlight came next as we saw millions of bats, quite literally millions, migrating from the top of a mountain, flying in a thick flurry, as if it was a swarm of bees. They moved in unity, in waves across the sky, and we stared up for about 20 minutes. The stream of bats kept coming, and would do so for around 45-60 minutes. In this time we also ate some really sour mango, which was quite an unusual taste combination, and different to the mango we had eaten of the train ride to Pak Chong, which had a sachet of what seemed like a mixture of salt, sugar and chilli. The train journey had been pleasant, viewing the landscape from the windows, the wind cooling us from the heat of the morning sun — but it had been long, and so after the tour we were ready for food, and for bed. The food was some of the best we had eaten so far, and we enjoyed it every night we were there. 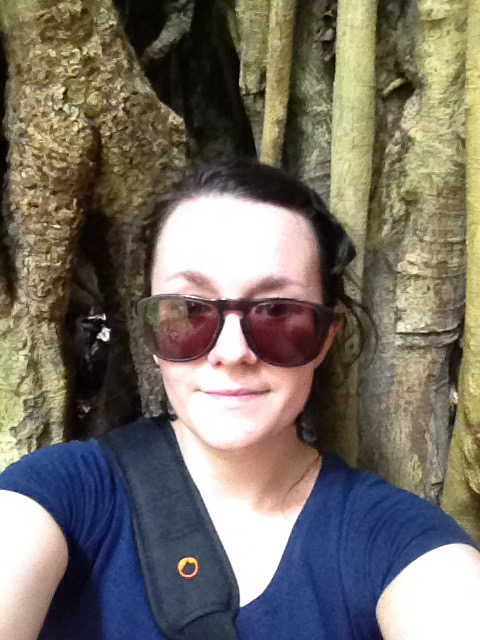 The weather had a welcome freshness, compared to Bangkok, perhaps due to the rain storm, perhaps also due to all the greenery, making it easier to breathe (plus, less pollution). The next morning we were up bright and early for the full-day tour. This day wasn’t as much fun as the previous, but there were definitely a lot of great things about it, and both tour guides we had were fault-less. They had amazing knowledge of all the animals and plant-life, a great sense of humour, and incredible enthusiasm, which kept our energy up. The only downside was that there was a lot of travelling between places, plus no waterfalls to swim in for me as the one we went to was too dry, and the only elephants we saw were apparently not wild, but ones for riding. My boyfriend keeps wanting to ride elephants, but I’m hoping we’ll find out more about why we shouldn’t do that at the Elephant Sanctuary in Chiang Mai.

It was cool that our tour guide was able to take us off the trail to parts he knew that were good to find Gibbons and other creatures, so we spent lots of time looking up at the tree tops to spot these, as well as trekking through the jungle and seeing other interesting things like a tangled tree that you could go inside. We had started the tour at about 7am and finished around 7pm, so we were certainly tired. I didn’t mind too much about not seeing elephants, but I guess it was a bit of an anticlimax not seeing them, purely because our guide seemed so determined to drive around to look for them… They need some kind of elephant tracking device, because the Khao Yai National Park is so massive! We climbed down a steep bank to see a crocodile, but they don’t move much, so after a quick look, I began to become tired and irritable due to the insects following me around. The monkeys are always my favourite bit when it comes to animals, and we got to see some up close as they gathered near at lunchtime, as well as spotting some deer. 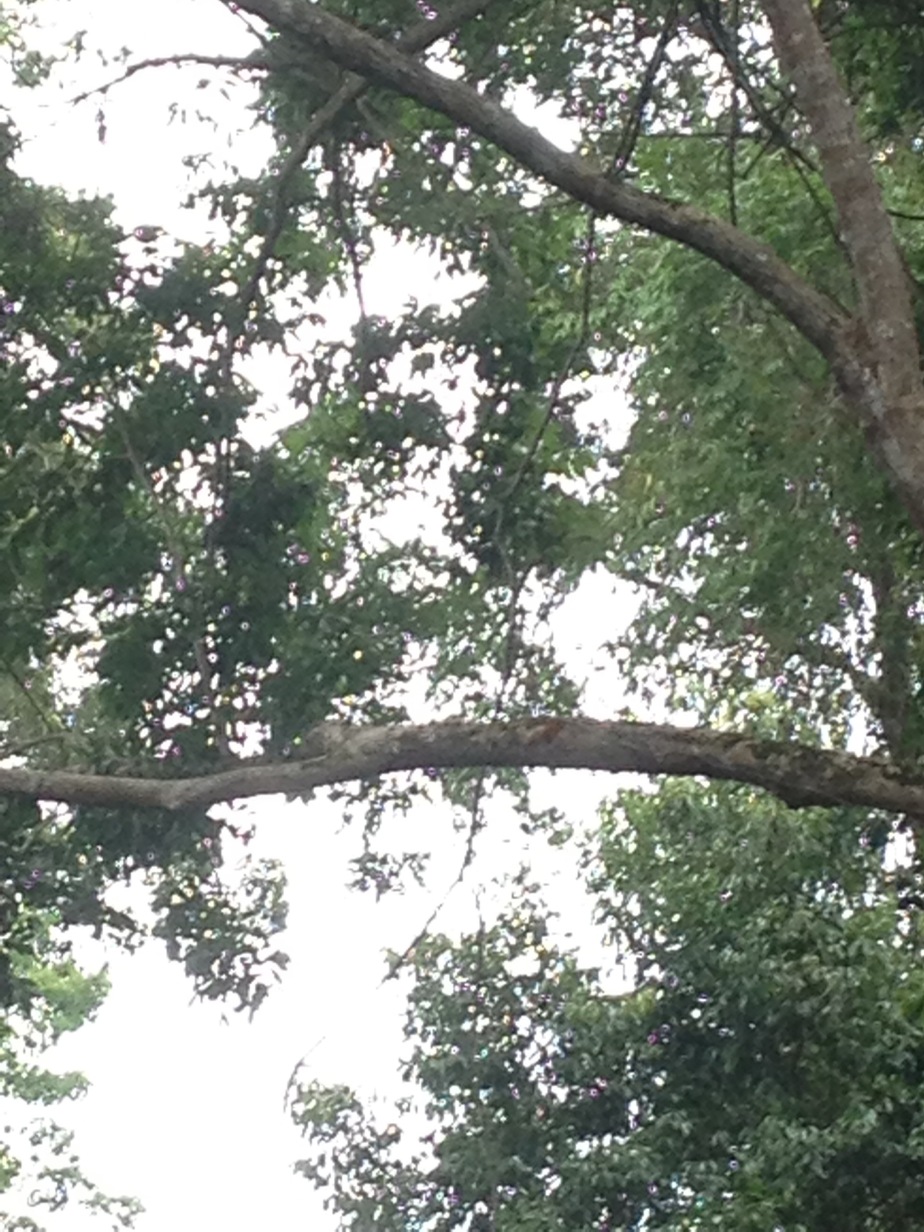 There was then some confusion after eating dinner about where we could go the next day, I’d been told we could enter the park for free the next day, and after thinking we might go to see what Pak Chong had to offer, we were told that there was nothing to do there without transport. So, it begged the question as to why I wasn’t advised against booking an extra night, but it wasn’t a big deal as, thanks to a German girl helping with communication, we were able to cancel our last night there, and instead took an impromptu trip to Ayuthaya the next day, joining a couple of others from the tour! 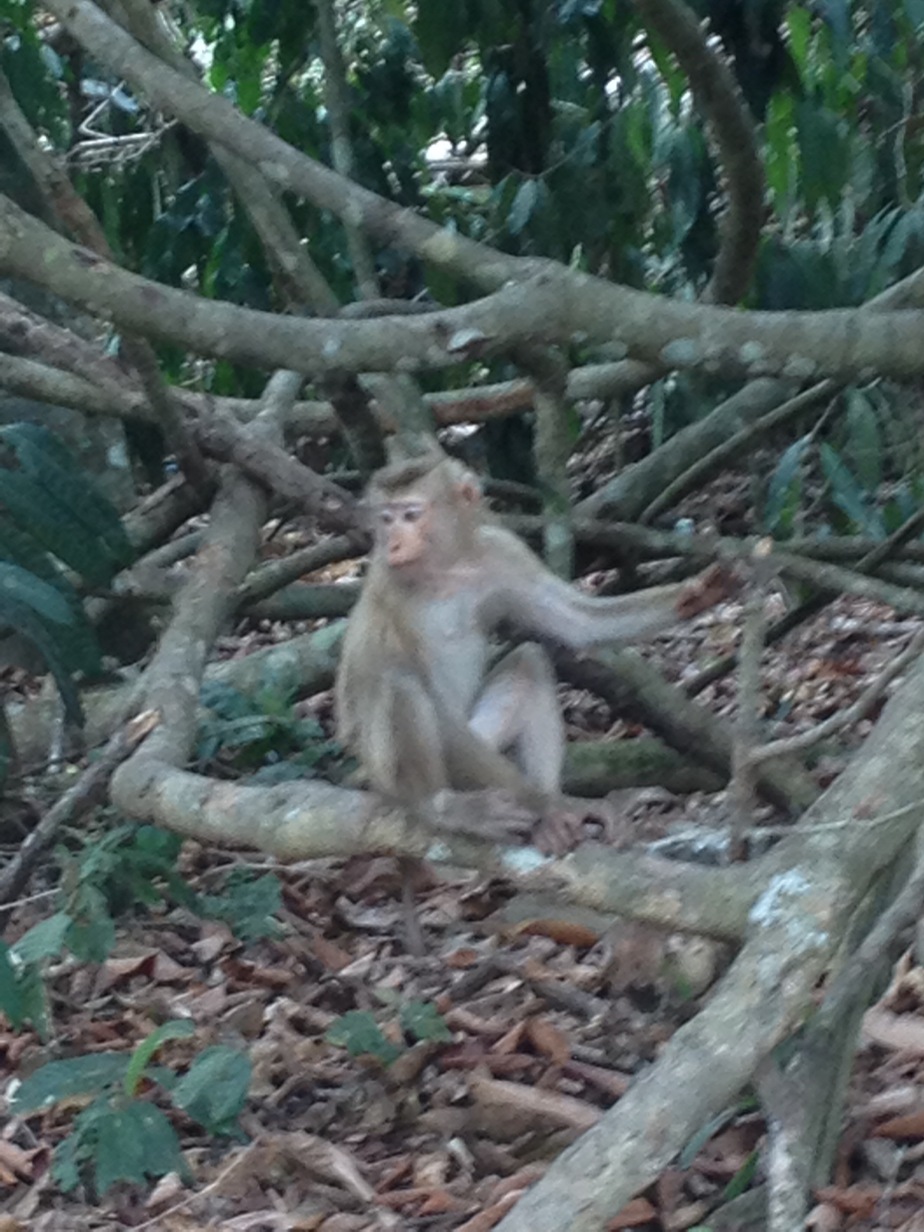