Last year at the FiL conference I went to a similar workshop about men and Feminism. This year, The Great Initiative came to deliver the workshop, which went through a some of the activities they would do with school children as a way of engaging them within discussions on gender and equality. Although the focus is on men and boys here, it is a far cry from the misogynist MRAs one can get used to trolling online. The men who are serious about addressing gender do so in a pro-Feminist way. Through ‘Great Men’, they aim to disrupt gender stereotypes and engage participants in the movement towards gender equality. The diagram below shows how they go about this. 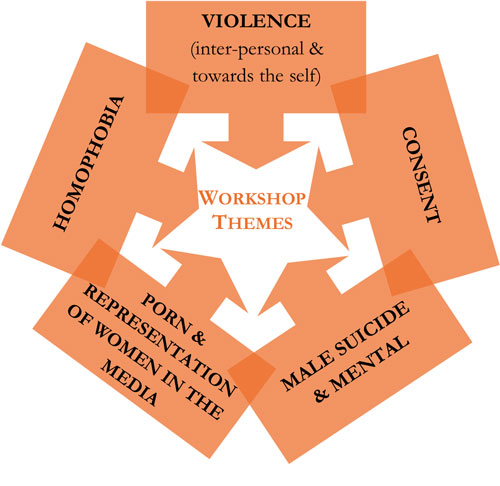 In the workshop, we started with word associations on big pieces of paper connected to men and women. The main bulk was in groups, where we discussed pros and cons men being engaged with Feminism. Our initial reaction to the task was that there simply aren’t any cons to men being engaged with Feminism. We then thought more about it in terms of either the act of engaging men itself and what are essentially maybe teething issues, so things like feeling men are to blame rather than it being about a system of power, but arguably paradoxically having to think about being in a position privilege and how that can be used for making the movement stronger. Yet, in terms of men who are engaged in Feminism, there may be a resistance to, in some ways, giving up power, and in turn a danger to dominate rather than listen and try to understand how life is coloured with experiences of being a woman. I managed to take a photograph of our notes on the topic. When the discussion was opened up, we managed to summarise, and there were moments where it descented into debate, but at the end we were left with this list to keep in mind, and some tools and approaches to engaging men and boys in Feminism.